Inside the Barrel: Interview with Audio Creator, Francis Brus

Welcome to Inside the Barrel, a series where we chat with members of the RB team about their work on the Outlast series, their jobs in the industry and of course, horror!

Our first interviewee is Francis Brus, audio creator on Outlast, Outlast: Whistleblower, Outlast 2 and now, The Outlast Trials. Read on to find out more about his process, how he got started, and his favorite horror movie of all time.

So, how long have you been at Red Barrels and, while we may call you the Sultan of Sound, Mr. Audio Creator, etc. what is your official title?

Francis Brus: I’ve been at Red Barrels for a bit more than 6 years now and I like the title Mr. Audio Creator!

The reason I often use those different nicknames is because when I joined the team here at Red Barrels we were like 8-9 people, and the title wasn’t important, the important thing was getting the job done. We were all just workers, technical specialists, grunts and directors of our own craft.

Being such a small team, and being the only sound guy, my job requires me to be the sound designer, voice designer, systems designer, Foley artist, music director and audio director… So I guess you can just pick one of those.

Did you always want to create audio for video games?

No, it wasn’t my life long goal to create audio for video games in particular, because it didn’t seem to be an actual thing back when I studied sound design. My interest for sound design and music was going to take me wherever I needed to be.

Then came a point where it dawned on me that combining video games AND audio sounded like I great idea and I thought “I want to be part of that”.

Interesting! I feel like that’s the case for a lot of people who are in this industry, especially since career paths to games are only NOW becoming a thing. How did you get your start in the industry? Was Red Barrels your first video game job?

Long story short: finding a job working in audio is not the easiest thing in the world. The demand is very low compared to the jobs available. So I started off, right out of school, working on jingles and music production and trying to find small contracts here and there, basically trying to find out what I’m going to DO with all this knowledge.

I tried to figure out where I would fit in best, is it recording studios, or TV broadcasting, or the radio industry, or…. until one day, I saw a job posting for a junior sound design position at an indie video game company (not Red Barrels) I applied, with absolutely no experience in games, but made it to the interview. I showed enough motivation and interest that they chose to give me a chance. That was 14 years ago. 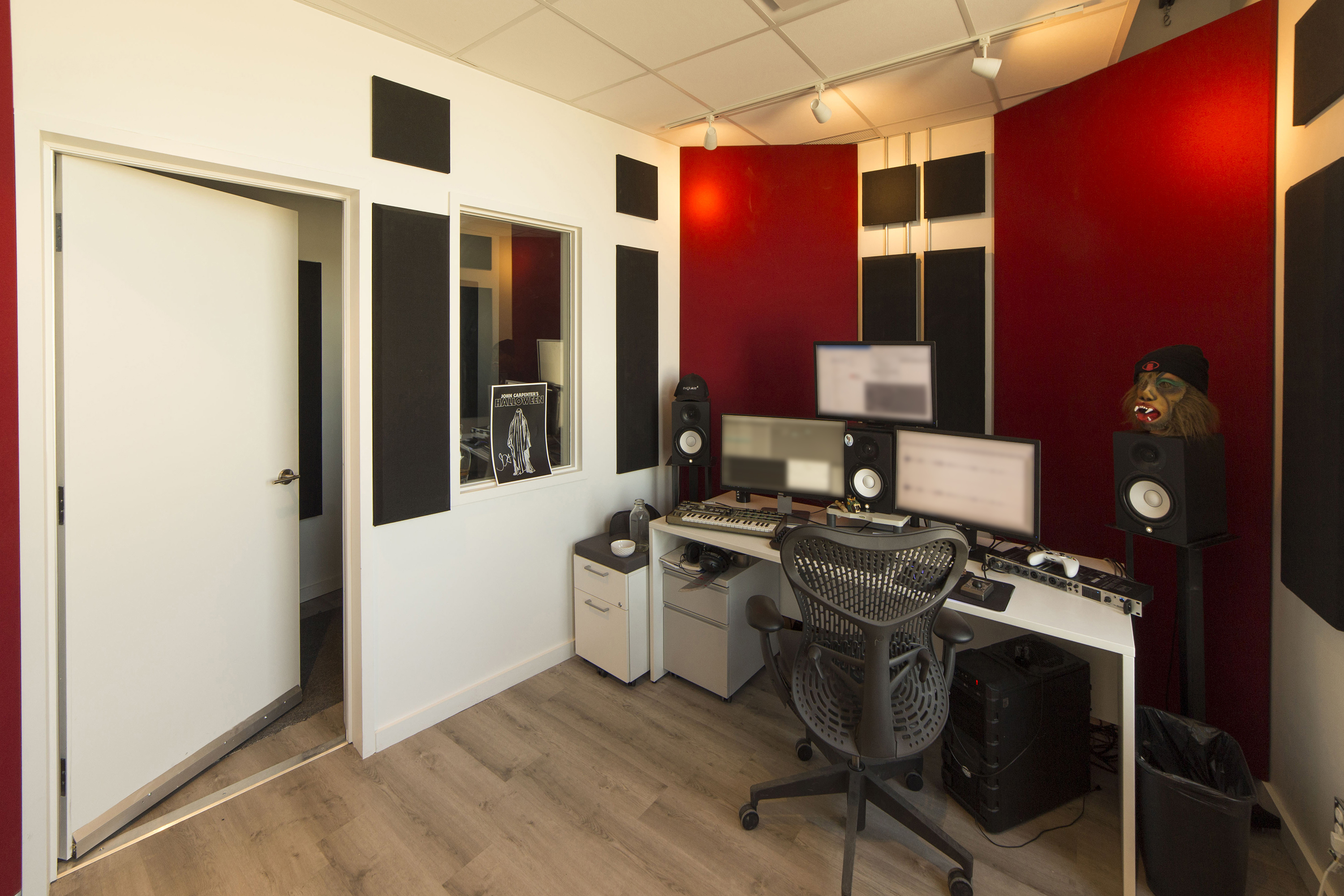 And I’m guessing you really impressed them, ‘cause you’re still making video games sound better to this day. So, What does an average day look like for you in the studio?

So first off, a coffee, a small chat with the team to get a feel for what is going on in the other departments today. And depending on the day, it could go from starting/finishing a feature with the design team, prototyping a new voice over system with the programmers, spending a few hours talking with the composer to try and finish off a cut scene we’ve been working on, maybe recording some impact sounds for weapons… etc.

What is something about your job that might surprise our players?

I’ll spin it around. You’ve been around my job as well, what surprised YOU about my job?

Smooth move. I think it was the time that you told me that you went on-site to a cabin for a weekend to do some Foley recording. I had assumed that it was all done in professional studios nowadays with like, really expensive equipment.

The equipment can be expensive but that place had EXACTLY the character needed to fit with the FEEL I was looking for.

Is there a part of the audio creation/design process that you enjoy doing specifically for Outlast?

All of it. I absolutely love being able to immerse the player into our madness. I enjoy the horror aspect and visceral-ness of Outlast. The asset creation, recording, design and implementation are all aimed at making the player go through hell with us…. and enjoy the ride so I love exploring the limits and finding new and fucked up ways of making the players feel uneasy.

If we’re going to hell, it might as well be fun to listen to, right? This might be a tough one: what has been your favorite contribution to the Outlast series, out of the things you’ve created or worked on?

All of it. Outlast as a whole was an amazing process and I’m very proud of it and our team!

What has been the most challenging part of working on Outlast?

I think it would have to be asset management. Many people don’t take into account just how many sounds/files (sound effects, voices, music stems, ambiances, etc) that are in modern-day video games, so asset management and discipline can be challenging. Also, when the coffee is not ready.

I imagine it requires a lot of folders, a lot of labeling and a lot of checklists. Do you have a go-to source of inspiration when you’re creating (or organizing)?

Everything and anything. The world can be very inspiring. Sometimes its music, sometimes nature (nature can be creepy as hell) and sometimes it’s complete silence. But the best inspiration is a deadline.

The looming threat of deadlines aside, do you have any advice for players who may want to follow in your footsteps professionally?

Do it… don’t just sit there and think about it. Try it, get the software, click on stuff, experiment with recordings, read stuff. Some of the best sounds/creations are often done with close to no equipment, just a cool idea and a little motivation.

And to finish us off: what is your all-time favorite horror movie?

Always has been, always will be The Shining. Hands down.

Who should we chat with next on Inside the Barrel? Is there a specific part of our process that you’re curious about or a technical question you’re dying to know the answer to? Ask us on Facebook or Twitter!